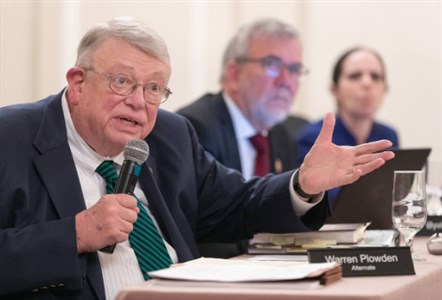 After 30 years of serving as South Georgia’s Chancellor – the legal advisor to the Bishop and the Annual Conference – Warren Plowden is passing the gavel, so to speak.

“Warren is so effective and so highly respected in The United Methodist Church because he is both an outstanding attorney and a joyful Christian disciple,” said South Georgia Bishop R. Lawson Bryan. “He is an example of what we mean by ‘the ministry of the laity’ in the way his professional life reflects his personal passion for Jesus Christ and his love for the church. Plus, he's fun! I never tire of listening to him recount some of his South Georgia stories. Warren is one of the treasures of our annual conference.”

Born in Bainbridge, Plowden has served as South Georgia’s Chancellor since 1990. A member of Vineville United Methodist Church, he has also served as a lay alternate to Judicial Council – the denomination’s top court – for two quadrennia.

The Judicial Council meets for a spring and a fall session each year. Their docket – the items to be ruled on – regularly includes reviews of all decisions of law made by bishops, matters which have been appealed to them, and requests for declaratory decisions. In General Conference years, the Council meets before and during the session to be available to review and rule on requests for declaratory decisions on the constitutionality of the Conference’s actions. As a lay alternate to the Judicial Council, Plowden has been an important part of this process.

“It’s been a lot of fun and a lot of work,” Plowden said in a video of his time serving with the Judicial Council.

As the longest-serving Chancellor in the United Methodist connection, in South Georgia Plowden has advised bishops, countless district superintendents, and conference leaders.

The guidance he’s offered has covered every dimension of church and conference life that had a legal implication. He’s advised on property matters, clergy due process procedures, and conference and district structure in accordance with The Book of Discipline. First serving as a member of the Conference Trustees, Plowden has helped them implement their decisions since his term ended. His counsel was invaluable during the Conference’s recent restructuring from nine districts to six, and he guided all legal and property matters related to that process. As a practicing attorney he has represented the Annual Conference in many court proceedings, some of which have involved matters that were appealed to the U.S. Supreme Court.

“It’s a poignant example of the ways you have shaped, influenced, and empowered the South Georgia Conference,” Bishop Bryan said in a video thanking Plowden for his service to the Conference. “You watched what was going on, you saw a way we could do it better, and you cared about that.”

Having served the South Georgia Conference and worked with eight bishops has been a blessing and a joy, Plowden said.

“It’s been my pleasure to work with every bishop since John Owen Smith,” Plowden said in a video. “It’s been a real treat and a pleasure to be the lawyer for the Conference.”

Thompson, a partner at Jones Cork, LLP in Macon, is a member of Macon’s Mulberry Street United Methodist Church. She also serves as general counsel and ex-officio member of the Boards of Trustees of the Methodist Home of the South Georgia Conference, Inc. and the Foundation for the Methodist Home.

“Cater Thompson is already well-known and greatly appreciated by the laity and clergy of South Georgia,” Bishop Bryan said. “In addition to her legal background and expertise, Cater is a practicing United Methodist with a love and appreciation for the local church and the annual conference. It is a blessing to have Cater’s advice and counsel in the South Georgia Conference.”