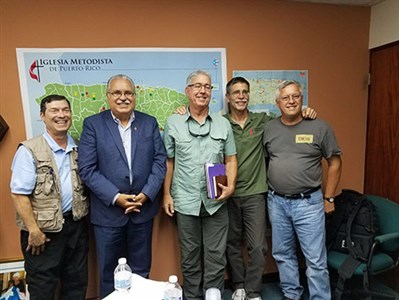 Showing the United Methodist Committee on Relief’s (UMCOR’s) support for its partner, the Methodist Church of Puerto Rico (MCPR), members of the UMCOR U.S. Disaster Response (USDR) Advance Response Team (ART) traveled to Puerto Rico this week to meet with leaders and help them chart a path for recovery.

UMCOR’s ART members are Ted Warnock, Luis Morales, Tom Vencuss, and Wade McGuinn, a construction/architect specialist. They are working alongside the MCPR Early Response Team (ERT) volunteer coordinator and construction project managers to further assess and plan for the first wave of skilled ERTs. When they return, Warnock and Morales will work with Barbara Tripp, an UMCOR consultant, to draft conditions for deployment of the first wave of ERTs and develop adjunct training specific to the needs of Puerto Rico.

The MCPR community has been actively addressing community needs caused by the devastating storm since Hurricane Maria hit the island, with UMCOR’s support.

UMCOR staff began their focused relationship with MCPR just prior to Hurricane Irma’s passing near Puerto Rico in early September.  When Hurricane Maria took direct aim at the island a few weeks later, UMCOR USDR team members were able to be in immediate communication with their MCPR counterparts because of the relationships that had already been formed.

Not long after Maria struck, Luis Morales, an UMCOR consultant, traveled to the Puerto Rico to do an initial assessment and hand-carried 30 lbs. of much-needed lithium batteries.

Earlier this month, Ted Warnock, traveled to the island to do an immediate assessment of delivery logistics. Warnock is an UMCOR consultant and supply chain functions expert. His arrival coincided with the delivery of 12 satellite phones that UMCOR had secured for MCPR to help their district staffers communicate with large areas of the Puerto Rico that are still without telecommunication services.

“Having the ART in place makes it possible for UMCOR to plan our strategy to work alongside the Methodist Church of Puerto Rico in the early phases of recovery,” said Cathy Earl, UMCOR director of U.S. Disaster Response and Partner Relations. “It is wonderful to have access to the expertise these ART members are offering the people of Puerto Rico.”