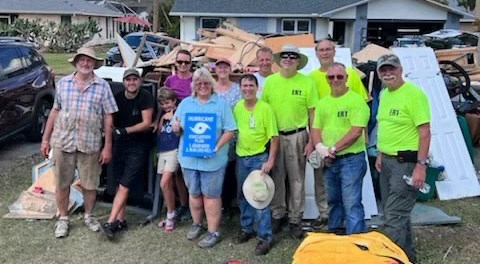 Hurricane Ian, whose maximum sustained winds of 150 mph tied it as the fifth-strongest hurricane on record to strike the United States, made landfall in Florida on Sept. 28, 2022.

Prior to the hurricane’s arrival, UMCOR and its local partners used a preemptive approach to storm response and recovery. Staff were in close contact with conference disaster response coordinators in states where an impact was expected and helped them plan their response.

A solidarity grant was immediately awarded to the Florida Annual Conference of The United Methodist Church to help them address immediate needs and deploy supplies.

Ian’s destruction was not confined to one state. After traversing Florida, the storm journeyed up the coast causing even more devastation in additional southern mid-Atlantic and northern states.

As Ian progressed, UMCOR was there for local partners with support. Ian was the first hurricane to make landfall in South Carolina in nearly six years. The heavy rain, high winds and flooding along the state’s coast caused substantial damage. A solidarity grant was quickly awarded to the South Carolina Annual Conference to help them address immediate needs, as they were able.

Lara S. Martin, UMCOR’s director of U.S. disaster response, traveled to Florida six days after the storm. While she was there, she met with conference leadership to express support and share the message that United Methodists everywhere were praying for them.

At its worst, Ian took out power for 2.6 million people. Even a week later, 200,000 homes still lacked power due to substantial damage to the state’s power grid.

Recognizing that mobile solar-powered generators can mean the difference between life and death when hurricanes and other natural disasters strike, Global Ministries’ environmental sustainability program collaborated with UMCOR staff to arrange for volunteers from the Florida and North Carolina Annual Conferences to learn how to build and install solar-powered generators that can be transported to disaster sites like those in Florida to help survivors communicate, work, store medicine and operate medical equipment in the middle of a disaster. The Rev. Jenny Phillips, senior technical advisor for environmental sustainability, coordinated a two-day session in Florida with instructors from the Footprint Project, a nonprofit whose mission is to provide cleaner energy for communities in crisis.

Additional relief supplies will be shipped to both areas from UMCOR’s affiliated warehouses.

After authorities have deemed that storm areas are safe to enter, UMCOR will assist the Florida Conference with the recruitment of early response teams (ERTs), individuals who have received specific training on disaster response and recovery methods.

With this year’s storms, UMCOR’s legacy of being “early in, last out” means that United Methodists will be there to accompany recovering communities for years to come. Individuals and congregations wishing to support those impacted by this and other U.S. disasters can replenish UMCOR relief supplies in consultation with local conference disaster response coordinators and by contacting local supply depots for drop-off information. Provide financial support for UMCOR U.S. Disaster Response by giving to Advance #901670.

Dan Curran is a communications consultant with Global Ministries and UMCOR.

A team from South Georgia, headed by Luis Morales, conference disaster response coordinator, was also in the Ft. Myers area of Florida immediately after the storm passed through, assisting with initial tarping and debris removal. The Florida Conference has already reached out to Luis about areas ready to receive teams. If you have a team ready to serve, please contact Luis (morhilll@gmail.com) or one of the disaster response coordinators. Read more and learn how you can give to disaster relief efforts now.