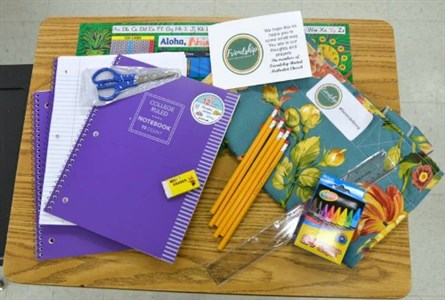 Children returning to Seminole County’s schools Monday, Nov. 5 received a surprise when they sat at their desks. Not only were their schools – damaged by Hurricane Michael – repaired, but on each desk sat a bag full of needed school supplies.

Early that morning, before school began, a team of volunteers from Friendship United Methodist Church descended on the schools. In a flurry of activity, they unpacked four pallets of boxes, hustled from room to room, placed one bag on each desk, and said a silent prayer over each, asking God to bless the students, the teachers, and the schools.

The United Methodist Committee on Relief (UMCOR) sent the 1,200 school kits to Friendship UMC, said Rev. Lehman, so the county’s children could be prepared for their return to school  after being out nearly a month after Hurricane Michael tore through southwest Georgia. The elementary school was heavily damaged in the storm and many children lost everything in their desks.

While Friendship UMC’s congregation has suffered greatly themselves, they didn’t hesitate to help the community’s children get back to school with the supplies they needed.

“Our church came alive,” said Rev. Nate Lehman, pastor of Friendship UMC in Donalsonville, of how the congregation came together to unpack and distribute the school kits. “Our staff has done amazing things here at the church, and to know that there are resources beyond our local church that are out there from other United Methodists, it provides an energy burst to know that you’re not by yourself. There’s no way that we would have been able to collect 1,200 students’ school supplies that quickly, so it’s an amazing thing to know that there are resources out there beyond our local church.”

The kits, shipped from UMCOR’s Decatur, Ala. depot, were packed and sent from generous United Methodists from around the connection.

“This is a beautiful example of the strength in the connection and the connection at work,” said Allison Lindsey, associate director for Connectional Ministries. “Our Conference was able to request the bags from Sager Brown and the connection was in action. We are familiar with the use of a cleaning bucket or a hygiene kit, but we don't hear about school kits as often or how they are used. This was such a creative way to distribute the kits. There are new guidelines for the school kits that make it easier for all ages to assemble. The directions can be found here.”

The elementary and middle-school students were excited to receive their school kits, which contained scissors, crayons, notebooks, paper, pencils, a pencil sharpener, a ruler, and an eraser. Paper and pencils were delivered to the high school and will be distributed as needed.

“The teachers said it was like Christmas for the kids,” Rev. Lehman said. “It was one less thing for the parents to think about, one less thing for the kids to think about. Having a second first day of school in a disaster area and finding paper and pencils is the last thing that a parent needs to worry about, or a child, if their home has been destroyed. This is one way to relieve a little bit of stress.”