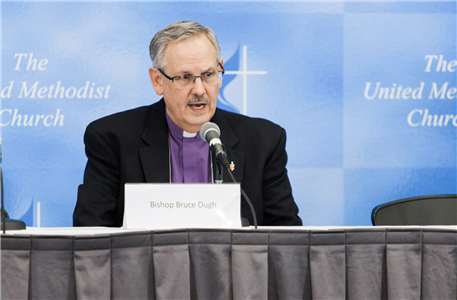 Bishop Bruce R. Ough, president of the United Methodist Council of Bishops, issued a statement today on behalf of the Council concerning remarks reported to have been made by President Donald Trump regarding immigrants. The statement follows:

We are appalled by the offensive, disgusting words attributed to President Donald Trump who is said to have referred to immigrants from African countries and Haiti, and the countries themselves, in an insulting and derogative manner.  According to various media accounts, President Trump made the remarks during a White House discussion with lawmakers on immigration.

As reported, President Trump’s words are not only offensive and harmful, they are racist.

We call upon all Christians, especially United Methodists, to condemn this characterization and further call for President Trump to apologize.

As United Methodists, we cherish our brothers and sisters from all parts of the world and we believe that God loves all creation regardless of where they live or where they come from.  As leaders of our global United Methodist Church, we are sickened by such uncouth language from the leader of a nation that was founded by immigrants and serves as a beacon to the world’s “huddled masses longing to be free.”

Thousands of our clergy, laity and other highly skilled, productive citizens are from places President Trump has defamed with his comments.  The fact that he also insists the United States should consider more immigrants from Europe and Asia demonstrates the racist character of his comments.  This is a direct contradiction of God’s love for all people.  Further, these comments on the eve of celebrating Martin Luther King Day belies Dr. King’s witness and the United States’ ongoing battle against racism.

We just celebrated the birth of Jesus Christ, whose parents during his infancy, had to flee to Africa to escape from the wrath of King Herod.  Millions of immigrants across the globe are running away from such despicable and life-threatening events. Hence, we have the Christian duty to be supportive of them as they flee political, cultural and social dangers in their native homes.

We will not stand by and allow our brothers and sisters to be maligned in such a crude manner.  We call on all United Methodists, all people of faith, and the political leadership of the United States to speak up and speak against such demeaning and racist comments.

Christ reminds us that it is by love that they will know that we are Christians. Let’s demonstrate that love for all of God’s people by saying no to racism; no to discrimination and no to bigotry.