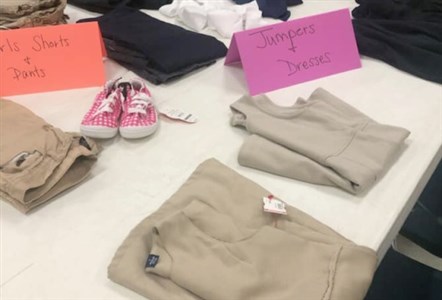 Wesley United Methodist Church is showing the love of Christ by serving.

Each month this year, the congregation has chosen a mission project as a way to give back to the Macon community. For July, Wesley UMC collected gently used or new school uniforms and hosted a free uniform giveaway July 30 and July 31.

Families were lined up, waiting for the doors to open, said Natalie Nicholl, a Wesley UMC member who helped spearhead the event. One family of five drove about 30 minutes to choose uniforms.

“We want to help take this burden off families and make getting school uniforms one less thing to worry about,” she said.

Nearly 90 percent of Bibb County’s public elementary school students are required to wear some sort of uniform, Nicholl said. She has to buy two sets of clothes for her two children – uniforms and play clothes – and said it can be difficult for some parents to afford.

That’s why the idea of a uniform swap was so appealing to Nicholl and co-organizer Jessica Whittington. With five children between them, neither wanted to throw away the uniforms their children had outgrown and knew there had to be a way to put them – and others like them – to good use.

“I was going through our closets and I hated to just put them in the box at Goodwill; you don’t know where they go or if they end up in a trashcan,” Whittington said. “This (uniform swap) cost nothing for the church to do and it was a great benefit for the community.”

The mostly-older congregation was enthusiastic about the project; they shared sales and even pooled their money together to buy clothing at Goodwill, Old Navy, and other stores to donate to the uniform giveaway.

“The congregation really embraced this idea,” Nicholl said. “I thought it was really neat that they were sharing amongst each other where they could get affordable items to bring to the clothing drive since they don’t have children at home. They were finding ways to participate and be involved.”

The church’s mission focus is one way it’s giving back to the community that has supported the congregation in their efforts to pay off the church’s building debt. Since December, Wesley UMC has held fundraisers and raised support to be debt free.

“It was important that we’re as intentional about giving to our community as we are receiving from it,” said Rev. Josh Gale.

But more than that, said Whittington, Wesley UMC members want to be welcoming, loving neighbors.

“We’re trying to meet our community where they are and find the needs and meet them.”