Where Does the Dollar Go?

One of the questions I heard as a pastor and often get in my role as Conference Treasurer is: “Where does the money I give to my local church go?”

If you gave a dollar to your local United Methodist Church in South Georgia in 2021, here’s where it went: 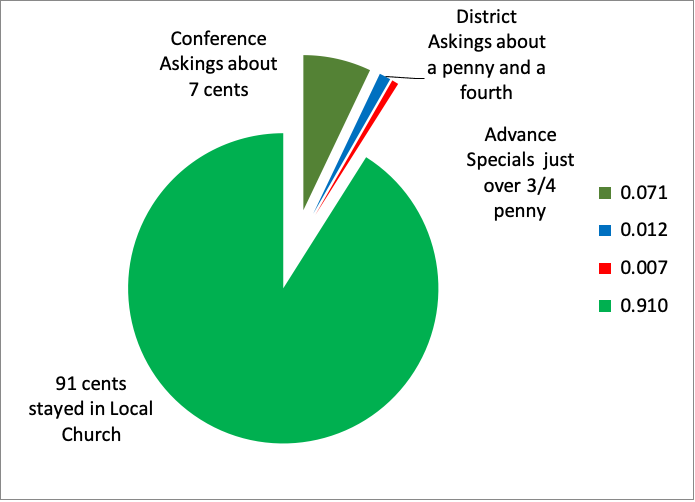 91 cents of your dollar stayed in your local church. Of the 9 cents that was sent to the larger UMC, 7 cents went to Conference and General Church Apportionments, while about one and a quarter cent went to District apportionments. Three-fourths of a cent was sent to United Methodist mission giving the local church chose to support (such as Advance Specials).

How did the local church spend its 91 cents? Based on data reported by local churches, 47 ½ cents went to staff salaries and benefits, while another 20 cents went for local operating expenses. 5 cents were spent on local church programs, and another five cents went to local benevolences, or non-United Methodist charities (such as a local community food bank or local mission team). 4 cents went for debt payment, and the remaining 9 ½ cents was used for capital expenditures on church facilities.

The amount spent on staff and operations is not surprising; the largest cost for most businesses is labor.  Many church members are surprised that only seven cents go to the annual conference and general church. Other members would like to see a larger share be put into mission and evangelical work.
This is a combined look at all United Methodist Churches in South Georgia, but each church has its own pattern of spending. I would encourage you to take a look at your specific church and see how the funds get spent.

At the end of the day, I hope every church is asking: how is my church’s spending helping us fulfill the Gospel’s call on our local church in our community?