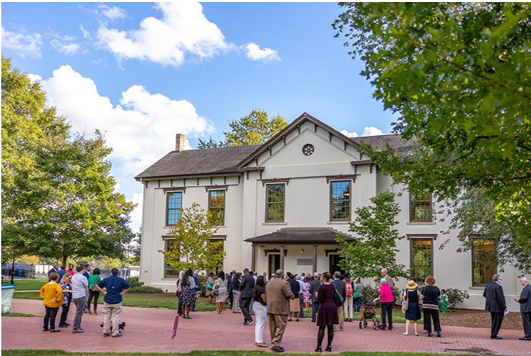 Oxford College of Emory University has renamed a historic campus building after the late Judge Horace J. Johnson Jr., an Oxford alumnus who became the first Black judge to serve on the Superior Court in the Alcovy Judicial Circuit, and established an endowment for need-based scholarships in his honor.

“Today we gather to remember and honor an extraordinary alumnus, Judge Horace Johnson, as we rename one of Oxford’s central academic buildings in his name,” Hicks told the gathering of more than 300 that included Johnson’s family, leaders from local community organizations, and Oxford faculty, staff and students. “Today Language Hall, which has been at the center of academic life at Oxford for almost 150 years, becomes Johnson Hall. Witnessing his name prominently featured at the heart of Oxford College, at the heart of Emory University, adds life to this community.”

Johnson graduated from Oxford College in 1977 and Emory’s Goizueta Business School in 1979. He went on to become the first Black judge to serve on the Superior Court in the Alcovy Judicial Circuit, which includes Georgia’s Newton and Walton Counties, serving from 2002 until his death in 2020. Among his many contributions to Oxford, he served almost 30 years on the College's Board of Counselors and mentored countless students and alumni.

The University Committee on Naming Honors, which was established in 2019 to review historic names represented on campus, embraced the name change from Language Hall to Johnson Hall. Fenves, recalling a time in the university’s history when talented African American students and faculty members were not allowed to learn, teach and thrive at Emory, celebrated Johnson’s achievements, his values and his lifelong dedication to public service.

“Judge Johnson did so much for the people of Newton County, Atlanta and the state of Georgia. As an attorney and judge, he was known for making history himself, serving as the first African American Superior Court judge in the Alcovy circuit,” said Fenves. “As a community member, he was always engaged — dedicating his time to numerous organizations in Newton County, including the Boys and Girls Club. He was always bringing people together to serve the common good, to take on big projects and to spark needed change.

“I have no doubt that Johnson Hall will serve as an inspiration to many students and faculty that will call it home for generations to come,” Fenves continued. “They will write the next chapter of Emory, but they will also have a reminder of what integrity, courage and excellence look like, what service can do for society and a community, and what one exceptional person can mean to an entire place, a city and a state.”

Michelle Bryant Johnson thanked Oxford and Emory for helping to preserve her husband’s legacy. “Our hearts are warmed, and we are so humbled by this expression. Horace loved Oxford. This is an amazing tribute to him on the campus that he adored,” she said.

A special element of the ceremony was a poem, “Among Us,” created and recited by Tameka Cage Conley, Oxford College assistant professor of English and creative writing. Other speakers at the dedication included Judge Cheveda McCamy, Superior Court judge in the Alcovy Judicial Circuit; James O’Neal, Johnson’s longtime friend and former Oxford roommate; and Oxford students Sarah Bekele, president of the Black Student Alliance, and Roxanne Chou, president of the Student Government Association.

Prior to the ceremony, a new sign for the building and a granite plaque in front of the building were unveiled. A portrait of Johnson commissioned by the local artist Rossin will be completed and installed next spring in the lobby of the new Johnson Hall.

“We want to thank Michelle, Bryant and James, and all of the Johnson and Bryant families, for your support and for sharing Horace with us,” said Hicks. “Through the scholarships that will bear his name and in this building, his intellect, compassion, dedication to public service and commitment to justice and equality will live on at Oxford.”