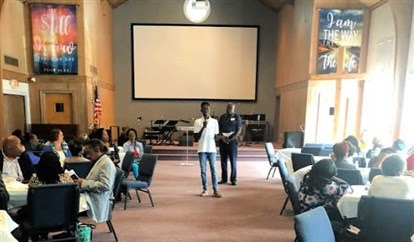 Congregations participating in the Strengthening the Black Church for the 21st Century (SBC21) initiative, a leadership and church development partnership between the national SBC21 and the South Georgia Conference, gathered for the third annual SBC21 Leadership and Development Conference Saturday, October 5 at Pine Forest United Methodist Church in Dublin. The conference focused on the following laboratories: Fresh Visioning, Reaching the Millennial, and Christian Education.

ML Harris United Methodist Church is a growing and striving church in the 21st Century!

One of South Georgia’s SBC21 (Strengthening the Black Church for the 21st Century) partnered churches, it celebrates accomplishing one of its SBC21 SMART goals, the creation of its Technology Ministry. Under the leadership of Rev. Donald Mathis and the core leadership team, the church has installed screens in the sanctuary and are experiencing the unifying engagement that they bring to the worship experience. They are also in the process of developing a church website, which will help promote and celebrate the church’s ministry, vision, and mission for the church and community.

The ML Harris UMC congregation is excited about their many accomplishments and continues to strive to achieve their SBC21 goals and ministry as they fulfill the Great Commission to make disciples of all of the nations (Matthew 28:18-20). 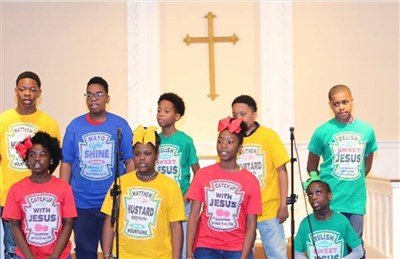 South Columbus UMC is one of South Georgia’s SBC21 partnered churches and continues to be a rich tradition and staple in the city of Columbus.

The congregation continues to work to completing their SBC21 goals. One of their goals is to establish a Children’s Ministry Zone (CMZ), a designated worship space for children ages 10 to 13. The area was previously used as a fellowship hall, but after a major flood in the basement, the space was reimagined as the CMZ.

After prayer, donations from members, and a grant from the Northwest District Committee on Missions, the CMZ was completed. Rev. Reggie Williams says that after accomplishing this SMART goal the participation from the children’s ministry increased and there was great enthusiasm.

The church has also launched another ministry, the “Tweens,” which serves youth ages 12 to 17.

The congregation’s other SMART goals are to grow average attendance by 10 percent, increase membership by adding 20 new members, and to continue to prioritize apportionment giving by more than ten percent of the budget to The United Methodist Church at large.

Rev. Williams says the congregation has greatly benefitted from the SBC21 coaching component.

SBC21 is a program designed to assist UM Churches with predominately black congregations in becoming vital and effective in mission and ministry. It does this through its collaborative coaching and training network, prison ministry program, national network of young adults, and through other innovative partnerships to revitalized churches.